Late for the Interurban 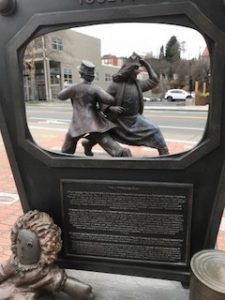 East of the Fremont Bridge on N. 34th Street, near Adobe Plaza, Seattle’s favorite clown, JP Patches, and his friend, Gertrude, are forever “Late for the Interurban” in these bronze statues created by Washington sculptor Kevin Pettelle. Installed in 2008 to commemorate the 50th anniversary of the J.P. Patches TV show, and viewable through a bronze “television” also created by the artist, the statues were funded primarily through donations from local fans who grew up watching the show. 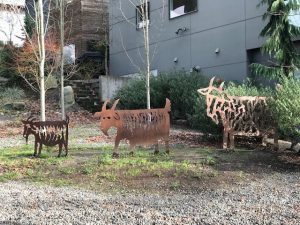 Children might also be interested in the three “garden sculpture” goats apparently on their way to the Troll. They are located just down the hill, at the intersection of Troll Avenue and N 35th Street.