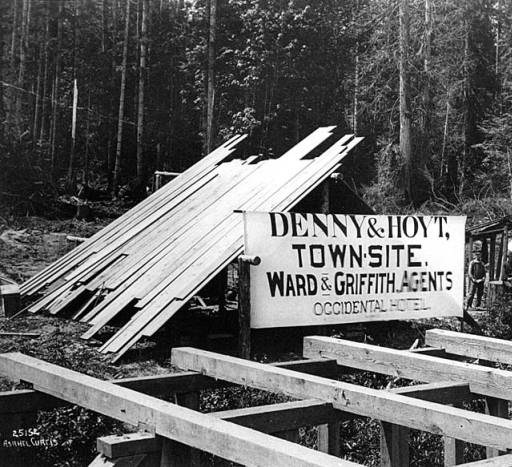 The Denny and Hoyt plat of Fremont was advertised by the Ward and Griffith real estate agency. Photo courtesy of UW Special Collections, Asahel Curtis #482 of May 1888.

A group of investors bought a vacant plot of land at the northwest corner of Lake Union in Seattle.  The principal investors Edward and Carrie Blewett from Fremont, Nebraska, named the new suburb Fremont.  The plat name of Denny and Hoyt’s honored the banking firm which facilitated the purchase, and the Ward and Griffith realtors advertised and sold lots in the new development.

Although the street names were different in 1888, we know the plat today as the land from 3rd Avenue NW on the west to Albion Avenue N on the east.  To the north, it  reaches N. 39th Street.   The plat extends to Florentia Street (on the north side of Queen Anne) to the south.

Photo of the 1888 real estate sign is courtesy of the University of Washington Special Collections of photographer Asahel Curtis item #482.