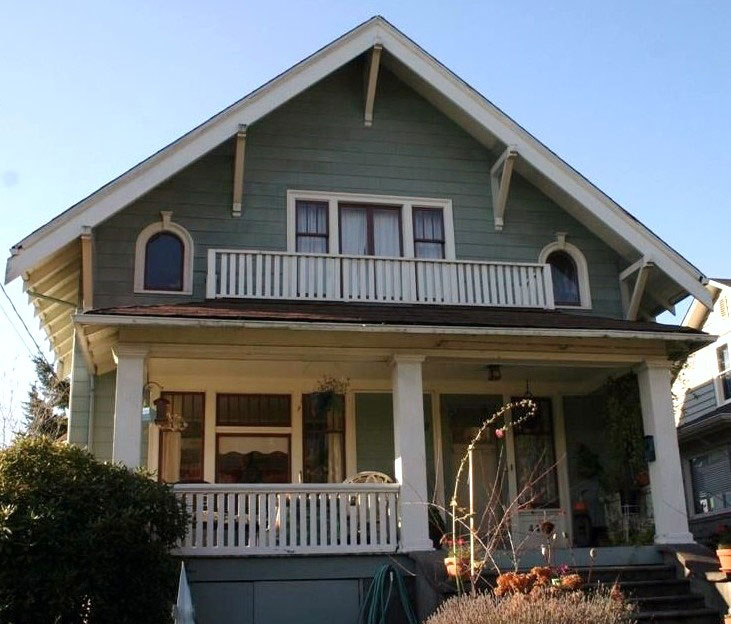 Fremont History in its Houses

The Fremont neighborhood has a lively history which parallels the story of the City of Seattle’s growth and development.

Just as in the beginnings of Seattle in what is now downtown, the earliest white settlers of Fremont were attracted by the availability of natural resources, most importantly water and timber.

Located just to the northwest of Lake Union, Fremont was on the banks of a stream which at first was called The Outlet, flowing westward through today’s Ballard and then out to Puget Sound.  The Outlet was also called Ross Creek and it was used to float logs to mill.  Eventually the creek became part of the route of today’s Lake Washington Ship Canal.

One way to outline the history of a neighborhood is by studying its houses: the design of the houses and the patterns of population growth.  In the month of May 2016 the Fremont Historical Society will have a display of house histories of Fremont’s early years, and a perspective of the development of the ship canal which greatly stimulated the growth of the neighborhood.

The survey work brought Charles Baker into contact with Seattle’s movers and shakers including Judge Thomas Burke, Edward C. Kilbourne and William D. Wood, and Baker’s name is seen on land investments with these men, including plats in Fremont and plats in the Wedgwood neighborhood in northeast Seattle.Charles H. Baker came to Seattle in 1887 as a single man determined to make his fortune and establish himself so that he could get married.  He worked as a surveyor for Seattle’s homegrown railroad corporation, the Seattle, Lake Shore & Eastern.

Charles Baker lived in Seattle for about fifteen years.  During his time in Seattle his land investments failed partly because of the economic depression which began in the year 1893.  His investments were in lands which were slow to develop, such as today’s Wedgwood neighborhood, which was too far from downtown Seattle to be convenient.

In the 1890s Charles Baker built the power plant at Snoqualmie Falls, only to lose ownership of it because of legal issues when his father died.  In 1904 Baker gave up on Seattle and moved to Florida.  Even though the power plant which Baker built continues to supply electricity to Seattle today, few people are aware that it was Charles Baker who made this essential contribution to Seattle.

One avenue formerly called Peck was later renamed Baker Ave NW between 2nd Ave NW (Harmon) and 3rd Ave NW (Crawford.)  Chicago Street is now 1st Ave NW.  What was designated as Palatine on the original plat map, is now called NW 43rd Street.One of Charles Baker’s early investments (1888) was a plat of land at a high point in western Fremont at N. 43rd Street, which he named Palatine Hill.  The name came from Baker’s home in a suburb of Chicago, Illinois.  In later years the streets in the plat had to be renamed for clarity, but the name Palatine Avenue was used for the former Adams Court (far right on the plat map.)  On the left side of the plat map, Crawford shows the boundary with the Crawford family property, which became 3rd Ave NW.

Fremont was officially founded as a separate area with its own name in 1888.  Its boosters were real estate men like Edward C. Kilbourne who, in addition to selling lots, also made sure that it was easy to get to Fremont — he controlled the earliest electric streetcar system in Seattle and he built a line to Fremont.  Fremont was soon settled by people who worked in lumber mills, carpentry and railroad work, and many of them were Scandinavian immigrants.

In 1908 Emil Nelson built a home for his family at 4407 2nd Ave NW in the Palatine Hill plat.  Perhaps Nelson intended the house to be a showcase for wood products from Nordquist & Nelson.  His house has unusual arched windows on the second floor, and decorative porch railings.  The barge boards and knee braces under the eaves are highlights of Arts & Crafts finishes to this Craftsman-style house.Swedish immigrant Emil Nelson worked in Fremont at the Bryant Lumber & Shingle Mill Company in the early 1900s.  In 1905 Emil Nelson and George Nordquist who had been a foreman at Bryant Lumber, left the company and went into business together.  They established Nordquist & Nelson which produced sash (window frames), doors, moulding and interior finishes for houses.

In the early 1900s as Fremont was developing, it was very common for a carpenter-builder to buy all of the lots on a block, build his own house and then begin building and selling additional houses.  The name of Emil Nelson was listed on the construction permits for other houses on his block which filled up with Swedish immigrants.

House history display in May 2016

Pondering the early photos of the ship canal

All during the month of May 2016 at the Fremont Branch Library, 731 N. 35th Street, there will be a display of house histories of Fremont.  These mini-research projects into when the house was built and who lived in it, help to portray the life of the Fremont community as it grew.  The house of Emil Nelson as described above, is included in the display.  Houses were chosen for this display for their architectural interest, for describing the early residents, and to show what resources are available for research.

Also included in the display at the Fremont Library is a panoramic photo of The Outlet, the channel which existed before being dug out to become today’s Lake Washington Ship Canal.  In this centennial year of the Canal, many local-history groups are coordinating research projects in commemoration.    In the above photo, Susan (in blue), a historian with Friends of the Ballard Locks, confers with Judie, president of the Fremont Historical Society, about photos of The Outlet.  In the coming year the Fremont Historical Society will work to find stories of how the canal construction affected the Fremont community.  Canal-history research will be featured at Preservation Month in May 2017.